The Center Tells the Story of the 1961 Freedom Riders

In 1961, the original 13 Freedom Riders boarded a bus in Washington, DC, bound for New Orleans via Mississippi and Alabama. They barely made it out of Alabama alive. Over the next three months, approximately 300 other riders took up the mantle and followed the path of those first brave few. Mobs brutally assaulted many. Others were arrested and, instead of posting bail, chose to serve sentences in one of the most brutal prisons in the South, Parchman Farm.

The Carrollwood Cultural Center will present The Parchman Hour, written by Mike Wiley, January 14-17, 2021. The show is done in the style of the variety shows of yesteryear, as it tackles social injustice and explores three of the tensest months of 1961.

“What drew me to the script was the way Mike Wiley chose to tell the story using a variety show theme, but still not sugarcoat or downplay the story at all,” said the show’s director Aaron Washington. “This is a mature script which will be sometimes unsettling, humorous, raw but always real.”

“Watching these actors explore and find themselves in this script is rewarding,” reflects Washington. “Being free with themselves to tell this story and appreciate the work of the Freedom Riders.”

More than 60 years after the Freedom Riders, social injustice and the fight for equality continues. Washington believes the stage is the perfect classroom for raising awareness to create change.

“I think the use of the arts to share messages or make aware a movement can be a peaceful alternative sometimes, albeit, not an instant solution because of the work that goes into producing theatre,” he said. “However, with plays like The Parchman Hour and The Laramie Project there will always be a voice through the arts.”

The Parchman Hour is being production through special arrangement with Mike Wiley Productions. 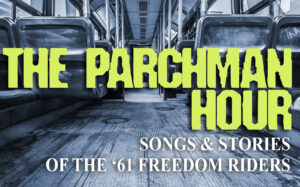 A Message from Richard Haerther

A Message from Todd Dunkle
Scroll to top