After a twenty-four-month-long intermission due to the pandemic and multiple schedule changes, Titanic the Musical took her maiden voyage at Carrollwood Cultural Center on March 18 through 27.

With music and lyrics by Maury Yeston and a book by Peter Stone, it is based on the story of the RMS Titanic which sank on its debut at sea on April 15, 1912.

Though the play was performed on stage to a live audience, the Center also made it possible to enjoy the musical live-streamed from the comfort of our homes. Images of the ship and the sounds of clanging bells, water, and seagulls prepared us for the coming story. Every actor in the show played a character based on a real person who sailed on the ship, with several playing multiple characters. 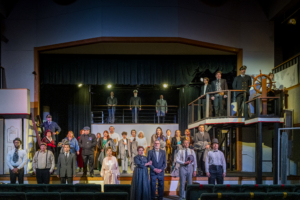 BWW Review: TITANIC THE MUSICAL Gets its Maiden Voyage at Carrollwood Cultural...

Dunedin artist Theodosia A. G. Tamborlane to exhibit at the Center
Scroll to top