Hoyt E Carrier II is a photojournalist and retired newspaper photographer who now lives in the Tampa Bay Area.  The former head of the photography department at The Grand Rapids Press in Grand Rapids, Michigan, where he spent most of his 50-year career, Hoyt has a passion for seeing through the camera’s eye, what others often miss.

From shooting on-the-scene news photos and professional sports to glamorous fashion, Hoyt captured the emotion, the joy, the beauty, and often the pain of the moment through his unfiltered lens.

For Hoyt, the qualities he strived for in his photography relied on the fleeting quality of light. “For me, first and foremost, it’s the light that makes the photo,” he says, adding that he views photographers as “the keepers of light.”  But, even before a photo is made, the type of illumination, the direction it comes from, and the shadows it casts, all come into play. “You wait for the sun,” he says. “The sun does not wait for you.”

After retiring in 2009, Hoyt and his wife, Kathy, traveled to the French regions of Provence and Alsace, in the fall of 2011 and 2013.  Like many other artists, from Van Gogh to Cezanne, Hoyt was drawn to the areas’ warm luminescence and how that light illuminated a more transcendent vision of France. “I can see why so many well-known artists were drawn to those regions,” he said. “The light is so different from anywhere else.”

From a crystalline fall day in Alsace to the subtle sunlight filtering into an ancient cathedral courtyard in Aix-en-Provence, Hoyt’s photos capture the timeless essence of light to connect the past with the present and preserve it for the future. 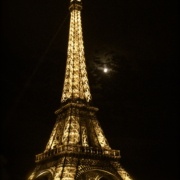