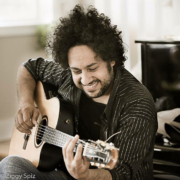 GRAMMY nominated guitarist Diego Figueiredo is a virtuoso with an infectious, joyful feeling that will leave you amazed and happy. Some people are simply meant to be musicians. Diego is one of them.

Diego Figueiredo is an extraordinary star among the world’s greatest jazz guitarists. His superb technique, timing, and imagination have made him one of the hottest international names. He has unique skills, and his concerts have been a great success in more than 60 countries worldwide. His concerts unite technique and emotion in a fusion of Brazilian music and jazz.

Figueiredo has released 28 CDS, 3 DVDs, and a book and has received awards twice at the “MONTREUX JAZZ FESTIVAL” as one of the greatest guitarists in the world. READ MORE