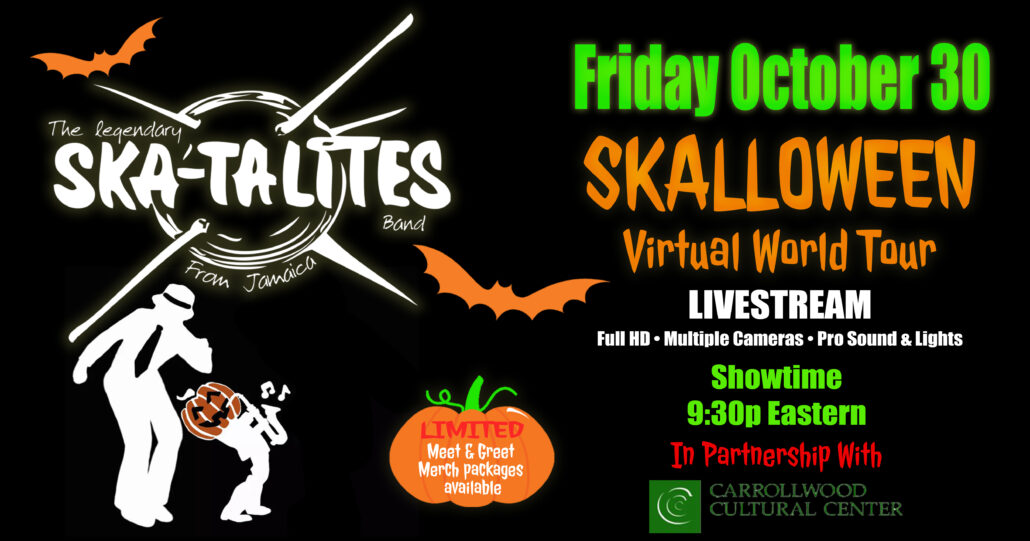 The Carrollwood Cultural Center is proud to announce our partnership with ska legends The Skatalites for their ONLY LIVESTREAM SHOW of 2020!!

Friday, October 30 at 9:30 pm eastern The Skatalites will perform onstage from Sony Hall in New York City and broadcast LIVE using multiple cameras and pro audio & lighting for the best online concert experience you’ve seen!   This ain’t no “live from my living room” deal.  Skank to your favorite ska classics, while chatting live with fans from around the world, all in beautiful HIGH DEFINITION and from the comfort of your living room!   There may even be a few surprises in store for this once-in-a-lifetime event.

2020 marks the 56th Anniversary of The Skatalites who secured their place in history early on by backing most of the vocalists in Jamaica including Bob Marley, Toots and The Maytals, Jimmy Cliff, Alton Ellis, Ken Boothe and many more. In the early 80s, their music started to spread to the U.S.A and other parts of the world. Bands began to emerge all over the globe playing different flavors of ska and reggae fused with whatever else they wanted to throw in, including hardcore, jazz, and even punk. In 1983 The Skatalites reunited to play Reggae Sunsplash in Montego Bay and subsequently in London at The Crystal Palace for the U.K version of the Sunsplash event. A few years later they began emigrating to the U.S.A and in 1986 the first US shows began at The Village Gate in NYC. The band supported Bunny Wailer on The Liberation Tour in 1989 and followed it up in 1990 embarking on their first-ever headline tour of The U.S.A. The Skatalites have not stopped touring the world ever since. Their uniquely infectious brand of real, authentic Jamaican ska entertains audiences of all ages across the globe year after year.

Start your Skalloween weekend in style with the legendary Skatalites!

The Carrollwood Cultural Center will receive a portion of your ticket purchase!

Can’t make the live show?  Your ticket allows video-on-demand replay for 48 hours after the broadcast ends.