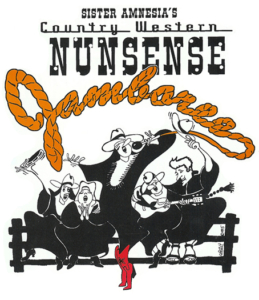 Sister Amnesia’s Country Western Nunsense Jamboree is presented as a promotional tour for Sister Mary Amnesia’s newly released album, I Could’ve Gone to Nashville. After regaining her memory, Sr. Amnesia (Jessica Jax) realizes she is Sister Mary Paul, a former country singer. Reverend Mother, feeling that one should not waste God-given talent, gets Sister Mary Paul a recording contract and now she is on a national tour. Introducing two new characters, Sister Mary Wilhem (the convent nurse played by Susie Rayburn), and Father Virgil Manly Trott (Sister Leo’s real-life brother played by Craig Ruska), this show is filled with hysterical one-liners and infectious comic tunes. Audience members will participate in a rousing “Country Auction” and join with the cast as they sing We know that somewhere up in heaven you’re a saint, Patsy Cline!

Will Sister Amnesia leave the convent for the Grand Ole Opry? You’ll have to wait till the finale, Do Unto Others to get the answer.

This show will be held in The Studio at Carrollwood Cultural Center.