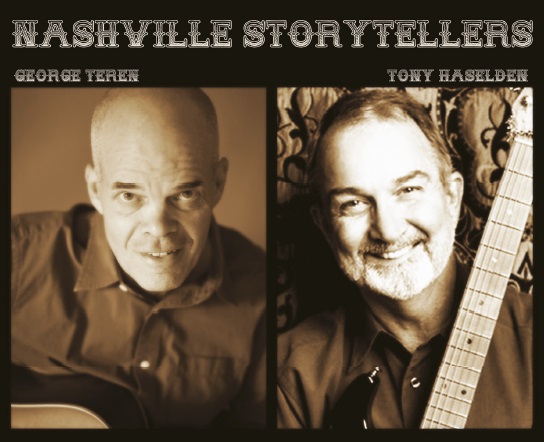 You know the songs, but do you know the stories behind them?  Join us for a concert with songwriters Tony Haselden and George Teren to hear the history behind some of country music’s most clever songs.

Tony Haselden is a founding member of Louisiana’s LeRoux. Tony’s unique and brilliant guitar style created the textures that helped define the band’s sound.  Tony is an award-winning songwriter and producer in Nashville, having written many #1 songs for popular artists such as George Strait, Colin Raye, Shenandoah, and Shania Twain.

On January 29, 2010 Tony was inducted the Louisiana Music Hall of Fame and the LMHOF Songwriters’ Association Hall of Fame!

George Teren moved to Nashville from Boston in 1987.
He spent 14 years at Zomba Music Publishing, garnering #1 hits for Tim McGraw (“Real Good Man”), Billy Ray Cyrus(“Busy Man”), Kevin Sharp (“She’s Sure Taking It Well”), and Rick Trevino (“Running Out Of Reasons To Run”).
In 2003, George signed with Full Circle Music Publishing  and has since had success with the #1 songs “Homewrecker” for Gretchen Wilson and “When I Get Where I’m Going” by Brad Paisley and Dolly Parton, which in 2006 garnered Song Of The Year nominations for the Academy Of Country Music awards. His song “Ladies Love Country Boys” by Trace Adkins was a multiple week #1 hit in early 2007.  And in early 2008 his song “Stealing Cinderella”, the debut single on RCA artist Chuck Wicks, peaked at #4.
FOR TICKETS CLICK HERE
Group rates are available for groups of 10 or more. Email [email protected] to make arrangements.
https://carrollwoodcenter.org/wp-content/uploads/2014/03/Nashville-Storytellers-Small.jpg 442 544 admin https://carrollwoodcenter.org/wp-content/uploads/2018/01/Carrollwood-Logo.png admin2014-03-31 12:15:422014-08-06 16:13:30NASHVILLE STORYTELLERS
PAUL TANNER, singer-impressionist

IF I WAS (WERE) A FISH with MR. TOMMY
Scroll to top