“I have led the young men of the South in battle; I have seen many of them die in the fields.  I shall devote my remaining energies to training young men to do their duty in life”.  “I will give that sum”. – General Robert E. Lee 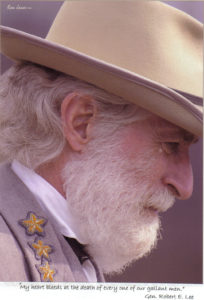 Al Stone has portrayed General Lee at the annual Gettysburg reenactment for eight years, including the 150th anniversary of Generals Lee and Grant at Appomattox, Virginia. He has participated in more than 1,000 other reenactments, including the nationally televised “The Trial of Robert E. Lee” at Liberty University’s annual July 4th celebration in 2002. He has appeared as General Lee in more than 30 small and big screen documentaries and movies. Mr. Stone has been described by Civil War re-enactors and historians alike as presenting the “most accurate impression of General Lee in the union today.”

The articles of clothing worn by Al are designed to replicate that worn by General Lee at various periods of his life.  Every step has been taken to be authentic and a visit to the Confederate museum in Richmond will testify as to this authenticity.  It’s Al’s intent to provide you a memorable visit with the venerable General Robert E. Lee. READ MORE