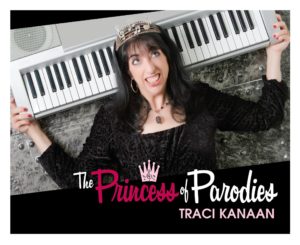 A local favorite, and international hit! Traci Kanaan, The Princess of Parodies is back, with more musical naughtiness than ever before…and now she’s a published author! Traci continues to delight audiences all over the world with her song parodies, funny facial expressions, weird stories, quick wit and her irreverent perspectives on life. Her book, “HEY, and Other Scintillating Mating Calls From The Online Dating World” is a collection of emails she received from men who allegedly wanted to date her, and her funny responses. Married or single, old or young, you don’t want to miss one of the most original musical comedy shows you’ll ever see.

Trish’s style of comedy is one part social satire, two parts personal pain and most parts attitude! After serving eight years of hard time in Catholic school, Trish eventually made parole and saw the need to share her quick wit and sarcasm with the world! Following in the footsteps of her comedy idols; Paula Poundstone, Joan Rivers and Wanda Sykes, Trish likes to rev up her own brand of minted sarcasm onstage regularly across the country.

Tiffany Barbee is a sweet and quirky retired pageant kid turned national touring stand-up comedian, 5th degree black belt, Bible student, actress and model. Tiffany loves dinosaurs, Star Trek, and saying “true words” (and gets away with it because she is cute). Tiffany is a co-host of an award winning comedy podcast on iTunes called “The Double Special Show”, she also has been heard as a featured comedian giving weekly love advice on Sirius XM Radio, and has opened for comedians such as Rich Vos, Michael Winslow, and Aries Spears.