“Demented, charming and brilliant” is how Allentown’s Morning Call described Dan Kamin, who created the physical comedy sequences for Chaplin and Benny and Joon, and trained Robert Downey, Jr. and Johnny Depp for their acclaimed starring performances in those popular films.  He also trained Rob McClure, the actor currently winning raves for his performance as Chaplin in the new Broadway musical about the comedian.

Kamin’s own comedic skills will be on display when he performs “Comedy in Motion—A Cheap Evening of Expensive Theatre,” in which he’ll lampoon “overpaid and egotistical performers of all kinds,” including pompous opera singers, obnoxious know-it-all magicians, and feuding “Dancing with the Stars” hopefuls.  The show will be presented at Carrollwood Cultural Center on Saturday, February 9 at 8pm. 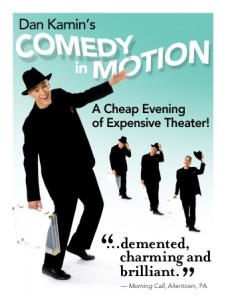 Click on the poster to view an interview with Dan Kamin.

While he’s in town Kamin will also offer a guided tour of the enchanted comic world of Charlie Chaplin when he presents “Funny Bones—The Comedy of Charlie Chaplin.”  In this unique hybrid of entertainment and education Kamin will deconstruct the work of the comic genius with film clips, live demonstrations of physical comedy, and lots of audience participation.  The centerpiece of the evening will be a classic Chaplin short with live musical accompaniment by well-known silent film accompanist Peter Tavalin.  This extraordinary two-hour program will change the way you look at comedy.  “Funny  Bones” will be presented at Eckerd College’s Bininger Theatre at 7:30pm on Wednesday, February 6, and repeated at Sarasota’s Glenridge Performing Arts Center on Sunday, February 10 at 2pm.

Critics have lauded Kamin’s  “unbelievable stage presence,” and even children sing his praises: “You made me laugh so hard that I got a headache,” said Kenneth, age 11. “Nobody’s ever done that before.”

In addition to creating the physical comedy scenes for Chaplin and Benny and Joon, Kamin played the wooden Indian that came to life in the cult classic Creepshow 2 and created Martian movement for Tim Burton’s Mars Attacks!  Asked about his movie work, Kamin says, “Classic movies inspired me, and I came full circle by adding classic visual comedy to modern films.  I taught Johnny Depp how to roll the coin around his fingers the way he does at the end of the first Pirates of the Caribbean movie.  But does he call?  Never.”

Despite his impressive stage and screen credits, Kamin’s artistic beginnings were humble. At age twelve he began his performing career as a boy magician, struggling to entertain what he calls “hordes of hyperkinetic, sugar-crazed children” at birthday parties.  Attending Carnegie Mellon University to study industrial design, Kamin’s hopes for a normal life evaporated when he saw the eye-popping movement illusions practiced by master mime Jewel Walker and promptly became the sorcerer’s apprentice.

The great silent comedy films of Buster Keaton and Charlie Chaplin added more fuel to his fire, and soon Kamin was touring the country with his first original show, “Silent Comedy…Live!”  Undeterred by the fact that vaudeville was long dead, he cobbled a new vaudeville circuit out of colleges, theatres, symphony orchestras and corporations, for whom Kamin often appears as a keynote speaker who falls apart.  “I applied my industrial design skills to building a collapsing lectern.”  He also becomes “Mr. Slomo,” an eerie character who strolls through public places in slow motion “terrifying the very children who tormented me as a youth.”

Kamin returned to his comedy roots to write Charlie Chaplin’s One-Man Show, revealing the secrets of Chaplin’s comic art.  Hailed as a breakthrough work, the book boasted a preface by another Chaplin fan, Marcel Marceau.  Dan’s new book, The Comedy of Charlie Chaplin: Artistry in Motion, updates his earlier book and features an account of how he trained Downey for his Oscar-nominated performance.

During recent seasons Dan has toured his solo shows throughout America and “humiliated many symphonies” with his comic antics, including Atlanta, Cleveland, Dallas, Shanghai, Singapore and Malaysia.

What got you interested in the type of stuff you do?

I’m overly susceptible to movies.  As a kid I saw a movie about Houdini and I promptly became a boy magician.  In college I saw a Chaplin film and I became a silent comedian.  Your readers will be relieved to know that I’ve never seen The Boston Strangler.

How did you learn magic?

I grew up in Miami, a notoriously crime-ridden city then as now.  I was taken under the wing of various shady criminal-types who liked to show off their skills at cardsharping and such to a goggle-eyed kid.  I became fascinated with the mechanics of deception, which naturally enough led me to a career in show business.

Why did you want to be a performer?

I was desperate for money, and I couldn’t get the job I really wanted, which was to be a bagboy or stock clerk at the local supermarket.  Those guys had cars, and girlfriends.  The best I could do was magic shows at the birthday parties of hyperkinetic, sugar-crazed children.  Unfortunately, I soon learned that girls tended to be repelled by magicians.

After you saw that Chaplin film in college how did you go about learning to do physical comedy?

An amazing mime artist named Jewel Walker showed me the tricks of the trade, destroying what slim chance I had of leading a normal life.

Are you a mime?

That’s how I started, but I couldn’t keep my mouth shut.  This was fortunate, since now everyone hates mimes.  And who can blame them?

Is it just you in your performances?

Usually there’s also an audience.  I refuse to go on if I outnumber the audience.

You often perform with symphonies. Do you play an instrument?

I play the buffoon, cheapening the classical experience and making it great fun for everyone except for conductors, who understandably hate and fear me.

What can the audience expect at one of your performances?

A lifetime of regret.

What was it like working with Robert Downey Jr. and Johnny Depp?

I taught Depp how to roll the coin around his fingers the way he does at the end of the first Pirates of the Caribbean movie.  But does he call?  Never.

How often do you come up with new performances?

Whenever I’m artistically inspired, or someone offers me money.  Which may be the same thing, come to think of it.

What other types of places do you perform?

I’ve performed in just about every imaginable setting—factories, theatres, the streets of London, mental hospitals.  For the patients, I hasten to add, not as a patient.

What makes these different than performing for a huge audience in a theatre?

I love performing for hospital patients or old people because they can’t run very fast.  Large audiences tend to turn into angry mobs of screaming, torch-bearing villagers out for my blood.

What do you do when you perform on the street?

See for yourself.  Mr. Slomo Goes to Washington was shot in front of the Supreme Court during the recent health care hearings.

Have you ever been in any movies yourself?

I did cameos in Chaplin and Benny and Joon and played a wooden Indian that came to life in the film Creepshow 2.  You can watch me cavorting with the stars here.  I also played a small, uncredited role in D.W. Griffith’s film The Birth of a Nation.

Do you have a favorite performance?

Do you have any suggestions for anyone interested in this type of performing?

Seek counseling at once.

Is this your first public performance in Tampa?

Yes, and it will almost certainly be my last.