no images were found

Alabama native Aaron Parker is quickly becoming one of the most powerful voices in country music. With highly energetic shows and unmatched stage presence, Aaron has captured the undivided attention of the music industry. In short, Aaron Parker is the future of Country Music.  In 2010, Aaron loaded up and headed north to Nashville Tennessee. A self-taught writer and guitarist, he naturally placed his energy on writing great country songs. In a very short time Aaron has had the privilege to write with some of Country Music’s best songwriters such Jim McCormick, Jason Matthews, Wade Kirby just to name a few. Most recently Aaron was asked to record 4 tracks that will be included on the soundtrack for the Kix Brooks movie “Thriftstore Cowboy” due out in 2012, one of which he wrote. Aaron also just wrapped up writing and recording the new Theme Song for Open Season TV.   Aaron Parker has come on like a storm to the world of Country Music and Country Music is better for it.

“…Aaron Parker certainly electrified The Carolina Theatre. The audience, charmed by his honeyed voice and impressive songwriting, showed their love for this new talent with a rousing standing ovation. We’re so proud to have had him perform on our stage on his inevitable rise to super-stardom.”  – Liz McDonald, The Carolina Theatre of Durham 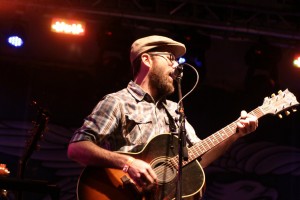 Opening for Aaron Parker…Matt Burke of HAVE GUN, WILL TRAVEL

Since then, HGWT has evolved into a full band, released three full-length albums and toured extensively. HGWT’s music has been featured in national commercial campaigns and TV shows such as the PBS series Roadtrip Nation and CBS’s The Good Wife. Burke will bring it back around full-circle with an intimate, solo performance.