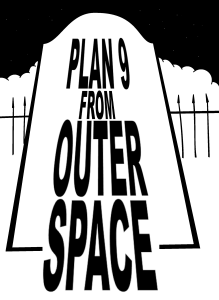 A SIDE-SPLITTING ADAPTATION OF THE CLASSIC CULT FILM!
Adapted for the stage by Mark Landon Smith
This is it! The stage adaptation of Ed Wood’s Plan 9 From Outer Space, considered by many to be “the worst movie ever made!” Packing B-Movie thrills into 70 action-packed minutes, the story goes something like this: visiting space soldiers use a magic-electro-space-ray-gun to resurrect a recently deceased (and perfectly ghoulish) human couple, putting “Plan 9” into action. The aliens must stop mankind from developing “Solaramite,” a substance that could set off a chain reaction of cosmic explosions that would destroy the entire universe. With “Plan 9” activated, the space aliens step up the action: Flying saucers invade! Hollywood reacts! The Pentagon responds! Even Colonel Sanders tries to stop the aliens and, well, this was absolutely the worst movie ever made. You’ll have a blast with this cosmic comedy perfect for all producing groups.

Plan 9 from Outer Space is presented through special arrangement with Steele Spring Stage Rights. For licensing information, visit the website at www.stagerights.com.