When was the last time you took a mid-day break? Join us for a Tuesday afternoon of movie fun with Loving Vincent presented by Carrollwood Village HOAs.  Healthy snacks and beverages will be provided, but you are welcome to bring your own as well as a blanket to sit on. Admission is free and reservations are not required. 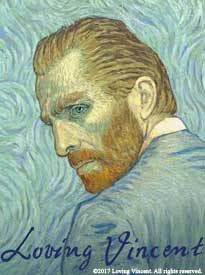 In a story depicted in oil painted animation, a young man comes to the last hometown of painter Vincent van Gogh to deliver the troubled artist’s final letter and ends up investigating the artist’s final days. (Rated PG-13)

Loving Vincent is an animated biographical drama film about the life of painter Vincent van Gogh, and in particular, the circumstances of his death. It is the first fully painted animated feature film. The film, written and directed by Dorota Kobiela and Hugh Welchman, is a Polish co-production, funded by the Polish Film Institute, and partially through a Kickstarter campaign.

First conceived as a seven-minute short movie in 2008, Loving Vincent was realized by Dorota Kobiela, a painter herself, after studying the techniques and the artist’s story through his letters.

Each of the film’s 65,000 frames is an oil painting on canvas, using the same technique as Van Gogh, created by a team of 125 painters. The film premiered at the 2017 Annecy International Animated Film Festival. It won Best Animated Feature Film Award at the 30th European Film Awards in Berlin and was nominated for Best Animated Feature at the 90th Academy Awards.